Great things to do in Dublin Docklands

In recent years, Dublin Docklands has transformed into a vibrant community that is fast becoming a go-to stop for tourists visiting the capital. Stretching across the north and south side of the River Liffey, the Docklands is an exciting hub of business, design and innovation that is steeped in industrial history. Only minutes away from Dublin Port, you won't be short of cultural and architectural landmarks to explore in this region, and it's the perfect way to get started on your tour of the best that Dublin has to offer!

A stone’s throw from the Liffey in the CHQ building, in the heart of Dublin’s Docklands, EPIC tells the stories of the 10 million people who left Ireland over the last 1500 years and how they went on to influence and shape the world. You'll be given an EPIC passport at the start of the tour and will proceed through 20 stunning, interactive galleries, which tell the story of Irish perseverance and struggle, adventure and discovery and belief and community. Although EPIC has only been open 3 years, we have welcomed over 250,000 visitors, including the likes of Harry and Meghan and Canadian Prime Minister Justin Trudeau.

EPIC has quickly been recognised as one of Ireland best museums and visitor attractions. EPIC was recently voted the winner of Europe's Leading Tourist Attraction at the World Travel Awards 2019. 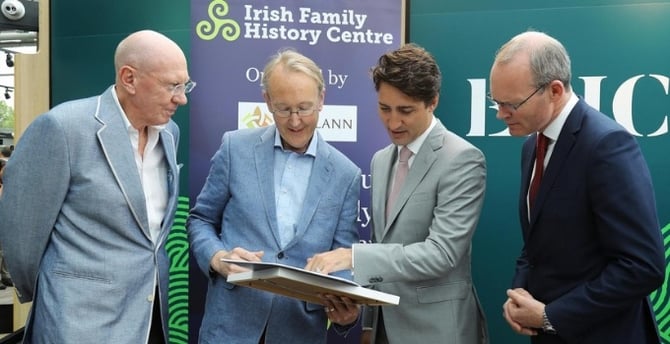 Ever wanted to know if you have Irish roots? Knowing who you are and where you come from is something we should all be excited about! At the Irish Family History Centre you can unearth your Irish roots and find out who those mysterious ancestors were. With the help of expert Genealogists, you'll be discovering your family story in no time. Located just inside the EPIC gift shop, stop by after your visit to the museum with the EPIC & IFHC Combo ticket. 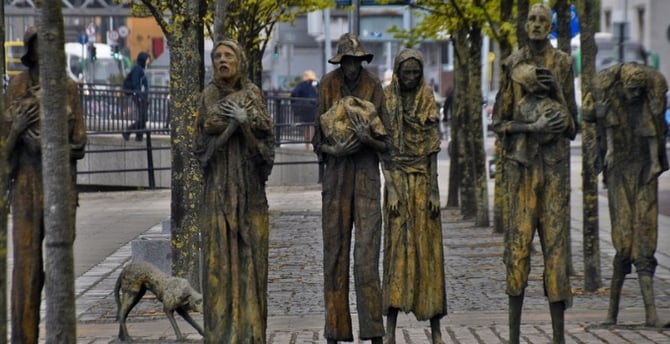 The Famine Memorial is a poignant collection of statues designed and crafted by Dublin sculptor Rowan Gillespie, and are situated across the road from EPIC, beside the River Liffey. Presented to the city of Dublin in 1997, the statues depict the starving Irish people walking towards ships to bring them overseas, away from the hunger and poverty of the Irish famine. As you walk alongside the river, stop by and observe the figures, which stand as a haunting reminder of one of the most difficult periods in Irish history. 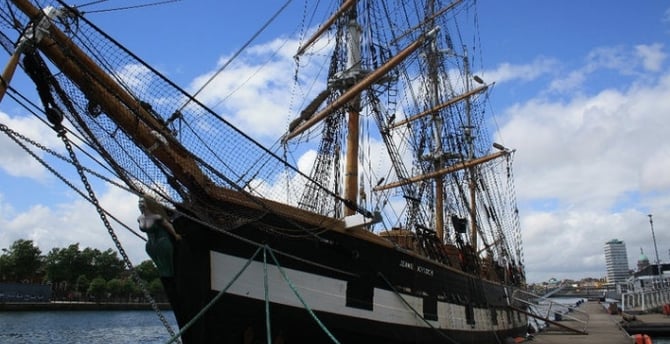 Just a few steps away from the Famine Memorial is the Jeanie Johnston, a replica famine boat that is a reminder of the journeys emigrants made across the Atlantic and beyond to escape the poverty and starvation. The vessels which they travelled in would have been crammed with passengers, travelling through rough seas to unknown lands. When you step aboard the ship, the expert tour guides will lead you through dimly-lit cabins to show what life was like for these emigrants hoping to start a new life across the Atlantic. 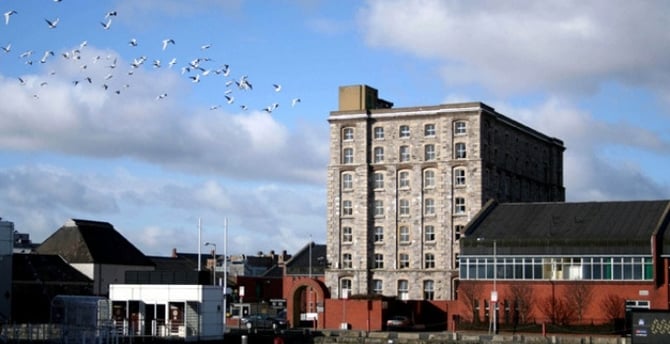 The Design Tower is situated south of the river and is home to a vibrant community of highly-experienced artists, designers and craftspeople. The tower, which was built in 1862 was originally a sugar factory built by renowned theatre architect Alfred Derbyshire with the engineer Sir William Fairbairn, and is now a listed building. The tower houses studios for creatives and you can make appointments to meet the creators and observe their work. 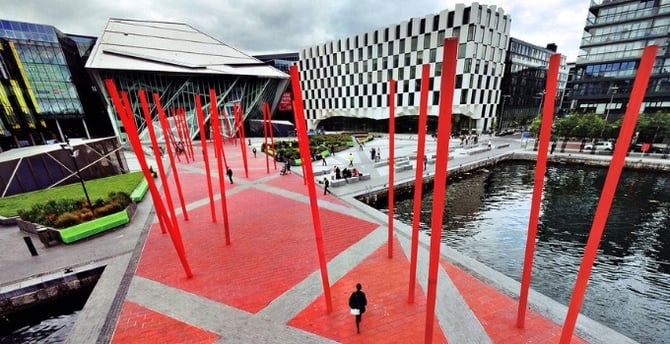 A super cool terrace spot, the Grand Canal is a great place to watch the city go by and see the canal activities such as diving, paddle surf and canoeing. Opened in June 2007, the square is located at Grand Canal Dock on the south side of the River Liffey, and is one of the largest paved public spaces in Dublin city. Filled with modern design, shopping, restaurants and hotels, it’s a glorious spot to stroll through and have lunch outside on a sunny day. 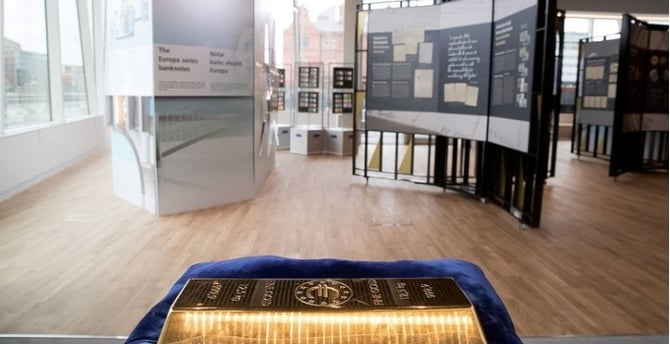 The Central Bank of Ireland’s Visitor Centre is situated in the Central Bank’s headquarters in Dublin Docklands. The Visitor Centre hosts frequent exhibitions open to the public, and you can explore the history and development of Irish currency throughout the years. The exhibits also include obsolete currencies and informative audio-visual content narrating the events that influenced the evolution of currency. 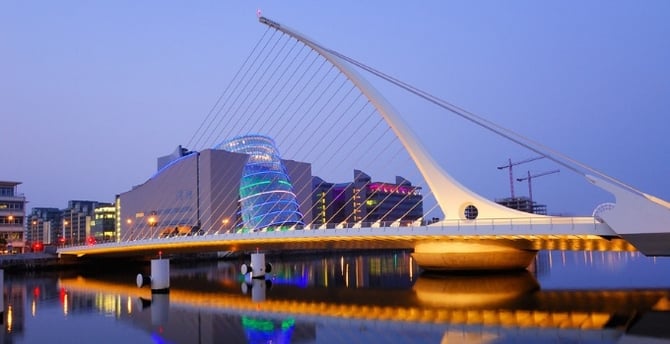 An icon of modern Dublin, the Samuel Beckett bridge joins Sir John Rogerson's Quay on the south side to Guild Street and North Wall Quay in the Dublin Docklands. Designed by Spanish/Swiss architect Santiago Calatrava, the bridge opened to traffic in December 2009 and has quickly became one of the most photographed landmarks in Dublin. The harp shaped bridge, given the national symbol of Ireland is a lovely little gateway into the city. 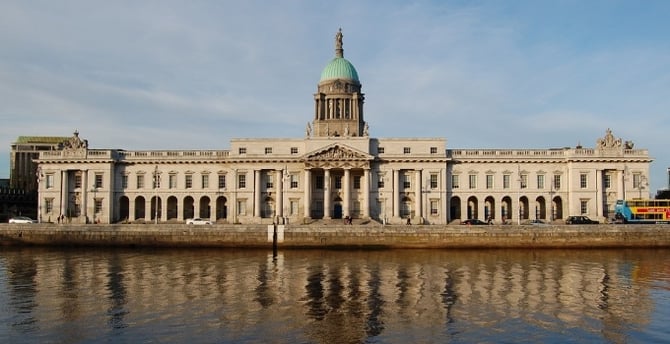 The Custom House is a 200-year-old landmark in Dublin, designed by architect James Gandon and built over a ten-year period. The building was originally intended for collecting custom duties and cost the equivalent of €27,000,000 today to build. Whether you admire its classical architecture or explore the grand interiors, this  historically significant building is well-worth a stop. Nowadays, it houses the Department of Housing, Planning and Local Government and certain parts are free to the public to explore. On a nice day, we suggest looking out from the upstairs windows to get a great panoramic view of Dublin. 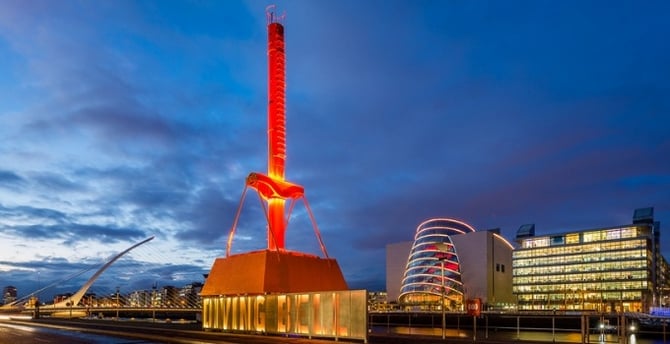 Be sure to visit Dublin’s Diving Bell in the heart of the docklands, which stands as an important symbol of the city's maritime heritage. Designed by port engineer Bindon Blood Stoney in 1862, the Diving Bell was a feat of Irish engineering in its day. Refurbished in 2015, it was used in the building of the Port’s quay walls for almost 90 years up until 1958. Its magnificent structure is an important mark of history along the river Liffey, so be sure to pay a visit - walk through the structure’s interior and read up on its history there.