The story of Martin Walsh 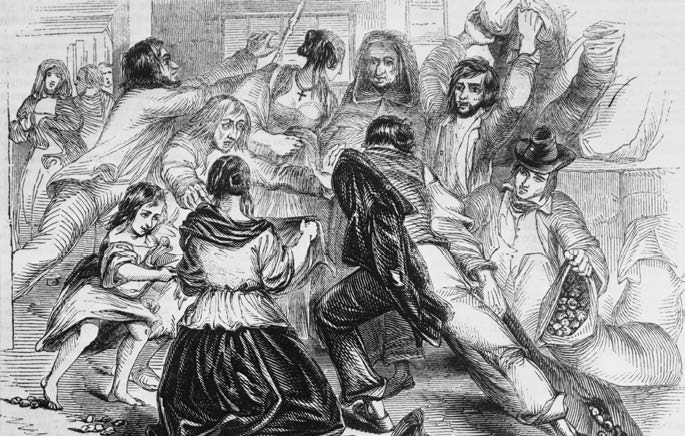 Digging deeper into story of boy born during Famine, Fiona O'Mahony and Maura Flood from the Irish Family History Centre unearth the missing pieces in the story of Martin Walsh

EPIC The Irish Emigration Museum’s collection includes four letters and a poem from 1884 and 1888 written by or relating to Martin Walsh. These documents offer glimpses into the life of a man who made his way to the new world like millions of others hoping to find a better life. They are also starting point for the Irish Family History Centre's investigation into finding out more about Martin Walsh's connection to Ireland.

The letters did not tell us where he was from but having found his marriage certificate in Massachusetts we discovered that he was baptised in the parish of Aglish, Co Mayo — just outside Castlebar — on October 16, 1846 and his parents were Luke Walsh and Mary Bannon.

Martin was therefore a child of the Great Famine, born just a year after widespread failure of the potato crop. His parents lived and worked in Carrowbrinogue as tenants of Lord Kilmaine. Their landlord’s family was granted lands in Mayo under the 17th century Acts of Settlement.

By 1876 the 4th Baron owned 11,564 acres in Co Mayo, 2,151 acres in Co Galway, 979 acres in Co Roscommon and estates of about 2,000 acres each in Westmeath and Wexford. At the time of Martin’s birth Kilmaine was an absentee landlord and his estates administered by agents, such as Charles Cromie, nephew of the 2nd Baron.

So what can we discover about the home that Martin grew up in and the conditions in which his family lived?

Using the Valuation records, we found that his family remained in the same house into the 20th Century, with no significant alterations to the building. We found a description of the house in the 1901 census, using the Form B1, the House and Building Return.

The Walsh family’s house had stone walls and a ‘perishable’ (thatched) roof. The family lived in two rooms, with only two windows to the front of the house. It was probably a traditional one-storey, whitewashed cottage, with an open hearth for cooking, and a sleeping platform above the hearth, typical of other houses in the district.

From the Form B2 we found that the Walshes had a cow-house, but no other buildings which tells us
something about the type of farming they practised. By 1873 Martin Walsh had settled in Clinton, Massachusetts, where on October 12 he married a fellow Mayo immigrant, Mary Philbin.

EMIGRANTS from Ireland tended to travel and settle amongst people they knew from home. We know that many emigrants from the Louisburgh area of Co Mayo, where Martin’s wife Mary Philbin was born, settled in Clinton, Massachusetts.

In 1828 Erastus and Horatio Bigelow started an industrial revolution in Clinton. Erastus invented a power loom for manufacturing textiles. With Horatio, a marketing entrepreneur, the brothers created a successful business. The Bigelows went on to develop a carpet loom which increased the growth of the town and Bigelows’ renowned carpets would be supplied to the White House, the Waldorf-Astoria, and the SS Titanic.

We find Martin and Mary Walsh in the United State Census of 1880 with Martin working as a ‘dyer’, an individual responsible for dyeing the fabric early in the production process. Mary’s occupation is listed as ‘Keeps House’. Also with them are Martin’s four sisters Annie, Maria, Kate and Bridget who all work as an ‘Operative Carpet Mill’.

Extended family members often lived together when they emigrated then, as evidenced by the US Censuses. But Martin’s agricultural roots were strong and he must have wanted to get back to the land rather than working in a factory.

The 1862 Homestead Act offered Americans and immigrants who had applied for citizenship an opportunity to acquire land in the west. Settlers first applied for a specific tract of land, following which they had to settle on it for five years and demonstrate that they had improved it. Following that they could secure full ownership. In the 1870s there were many advertisements seeking to encourage Irish people to move to Nebraska.

We know that in May 1884 Martin Walsh ventured west to change his life and fortunes again. In a letter from Dublin, Boone County, Nebraska in 1884, he writes to his sisters who remained in Clinton:

“I know you will be glad to hear that I got a very speedy and safe passage… I was two nights in the car and the third night I slept in Columbus, Nebraska but was delayed there until 4 O’Clock the following day. I arrived in Albion at 7 ’clock Thursday evening and rode to Cedar Valley Friday morning on the mail car… I cannot say much this time. I did not start anything yet… I will let you know every move I make… The attitude of the people here is a little more cheerful than I imagined.”

Want to learn more about how you can start researching your family history? Click here to read the Irish Family History Centre's 12 tops tips and advice on how to begin exploring your Irish ancestry.

HAVING moved to Nebraska we found Martin and his wife Mary in the 1885 State Census living in Cedar Valley Precinct, Greeley County, Nebraska. Martin is again working as a farm labourer and Mary keeping house. Misfortune appears to have found Martin as he writes to his sister Katie on June 15, 1887.

On the 4th April I was run over by a horse in Spalding and knocked senseless about 30 yards from where I stood... The break was a very good one… but the doctors who set it did not take the proper
care of it… The leg not being kept tight together it began to lose its natural form the end of the bone next the ankle began to fall down and that end leading from the knee began to raise.

The doctor then put cotton around the leg and plaster which was left for five weeks. But unfortunately there was too much cotton and bandages inside and the leg was yet loose. So when it was taken off after 7 weeks doctoring it looked pretty bad. It was crooked, badly deformed, a good deal short and one end of the bone raised about one inch or perhaps more over the other.

He is advised to have an Omaha surgeon break it again. At the time of writing, Martin has been ‘ten weeks now on the broad of my back’, and asks his sister to have ‘a mass said for me in Clinton. Do not let my people in Ireland know about my misfortune.’

He finishes by telling her:

I was just beginning to get well off I had everything I wanted and in fact would soon be rich but every time I get that way something has to happen. I have 60 acres of land broke and have to pay a man pretty high wages to take care of crops and $6 per month to pay a little boy to do chores.

He signs off that he is travelling to Omaha hospital the next day, and with a poem.

A little poem I composed in my sad and lonely hours:

My couch is hard, my suffering great
O would to Heaven I never saw this state
The people here their hearts are steeled
They cannot imagine the pain I feel
No pitiful expression my poor heart soothed
But cold indifference and disinterested moods
No mourning sighs or tears are shed
Around my lonely and suffering bed
Ah if my parents whom I love well
Were around my chamber then I could tell
Of affection true and friendships kind
That would soothe the heart and ease the mind
With sobbing voices I hear them now
With gloomy shadows o’er their brows
With mourning tears in pity shed
Around my lonely and suffering bed
Farewell to Erin and the good old home
From which oppression cause me to roam

Martin Walsh
P.S. My wife and her people are doing all they can for me and I hope you will always remember them respectfully.

In June 1887 Martin Walsh was knocked down by a horse and badly injured. He wrote that he was leaving for Spalding for hospital in Omaha. A year later, in July 1888, he wrote to his brother-in-law Pat Morley, his sister Bridget’s husband, from St Mary’s Hospital, Columbus, to congratulate them on the birth of their son.

He thanked him for being willing to travel and added that:

I may be able to leave the hospital in two or three weeks then I will do my best to sell all and go to Clinton... Let me know if you heard anything from the old folks or Brother John lately.

Unfortunately, it appears that he never made it back to Clinton. Our final letter is from Sr Mary
Francis in the hospital in Columbus on October 29th, 1888 advising his sister Katie of Martin’s death. She says that ‘he was very resigned and well-prepared… and bore his suffering with patience.’

Martin followed his dream to Nebraska but a fateful collision with a horse ended not only his ability
to farm but also his life.

Conducting our genealogical research into Martin began with the transcription of the letters in EPIC The Emigration Museum’s possession. In all his letters he mentioned people and places which gave us
enough clues to trace him back to Ireland. He mentioned that he had many old friends in Clinton, Massachusetts so we started with the Censuses in Clinton, Massachusetts and found him listed as Martin Welch in the 1880 Census with his wife Mary and sisters Annie, Maria, Kate and Bridget; Welch being a variation of the surname Walsh.

Chain migration was important to our emigrants as it helped them settle in their adopted country. On
the 1885 Nebraska State Census Martin was listed with his wife Mary in Cedar Valley as was her family, the Philbins. We located Martin Welch’s marriage to Mary Philbin in 1873 in Massachusetts which gave his parents’ names of Luke and Mary B. His letters also mentioned the Bannon family so
this gave us another clue that his mother’s maiden name could be Bannon.

During his illness in 1887 he wrote a poem which mentioned his parents followed by a later letter in which he referred to both his parents and his brother John. This gave the impression that they were still alive at that time. This led us to the Census in Ireland in 1901 where we found his brother John Walsh (Luke) with his wife Bridget in the townland of Carrowbrinoge, Castlebar. Walsh is a very popular name in Ireland and in particular Co Mayo. The enumerator for the Census added the name Luke in brackets after the Walsh surname to distinguish them from other Walsh families in the area.

With this information, the baptism of Martin Walsh was discovered in the RC Parish of Aglish on October 16th, 1846, followed by the baptisms of his siblings. His father Luke Walsh was farming on the townland of Carrowbrinoge in the mid-19th century. It was probably this background which eventually led to Martin farming in Nebraska.