At our Europeana Story Collecting Weekend, we teamed up with Humans of Dublin to capture some amazing stories of migration and departure. The event took place on 18-19 August as part of National Heritage Week, and visitors brought along one or more objects that were part of their migration story. Here are some of the stories.

I was heartbroken and terrified of going into the unknown… 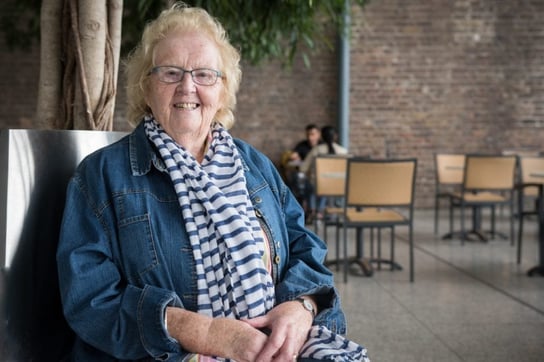 “I got my school exams but my mom couldn’t afford the uniform to send me to the next phase so that was it… My dad died when I was eight, my mother had to look after me and my brothers alone. I remember one day, me and my friend, we were sitting beside the river and I just said, ‘let’s go to England and get a job!’ I remember my decision only really hit me when the boat was leaving and I saw my mother waving and crying as we slowly left the port. I was heartbroken and terrified of going into the unknown at such a young age… and it didn’t get any easier, but we both got jobs in the Cadbury factory and we spent three years there. They were a lovely company to work with! They provided a hot chocolate and bread for breakfast and we could eat as much chocolate as we could. To be honest that was the only thing that kept us alive really… I used to earn 3 pounds a week. I sent one-pound back home and with the rest, I had to pay the rent, feed myself and save up to be able to come home once a year. After the three years, my friend told me about this opportunity to become a nurse and I always wanted to study so I thought I would give it a try. They were only 10 years old when I started and back then most of the hospitals in England were staffed almost entirely by Irish people… We never got any recognition which makes me very sad to this day, however, I made some life-long friends and created beautiful memories working with them.”

I will never forget that call… It was my mother. Her voice was just so sad. She said; ‘Ahmed, don’t come home today…

“I didn’t want to leave my country but my city was already surrounded, under constant bombing and gunshots. I will never forget that call… It was my mother. Her voice was just so sad. She said; ‘Ahmed, don’t come home today. The police were here looking for you if you come home they will arrest you again’. I’d been arrested before… I’d been tortured for weeks and I’d been beaten up many times. I had to leave without going home to pack any of my belongings or to hug my mother… I had this thought in my head that I would go to Egypt for a few weeks, maybe two months and I would return when things got a bit better. Well, things didn’t get any better. My family went through a lot to follow me to Egypt. They had to leave everything behind… We were together, living in Egypt for a few months but there was a political change and the new president made a deal with the Syrian regime to make it extremely hard for Syrians to stay. I asked the Embassy for my passport and they told me; either I go back to Syria to do my military service or I will never see my passport again. Then I had to look for a way out of the country without my passport. It wasn’t actually that easy to find a smuggler but I did. That’s a story in itself. From Egypt to Italy it took ten terrible days, we came in an old fishing boat with a drunk and greedy captain. It was so overcrowded that you could only sit. There was nowhere to lay down. I couldn’t take enough food and water with me and there were times when I was sure I was going to die. We got caught in a storm and the captain ordered everyone to throw all the belongings out of the boat and he kept moving everyone from one side to the other to balance the boat. The waves were splashing over the sides and I was prepared to die. All I could think of was that I hope I will able to meet the people I lost in my life… But then out of nowhere, there was a huge military ship beside us. We got rescued and my long journey ended in Germany. When I arrived in Germany I applied for asylum… I’m in Dublin because I enrolled in an English teaching course, I want to be a teacher back in Germany. At the class, I met a beautiful girl and we are together for 2 months now. She is planning to come and live with me in Germany. I still have nightmares, but for the first time in a very long time I feel safe now…”

"If you ask me where I am from I say; ‘I’m from Tallagh’. I was born in Brazil but I have an Irish Heart" 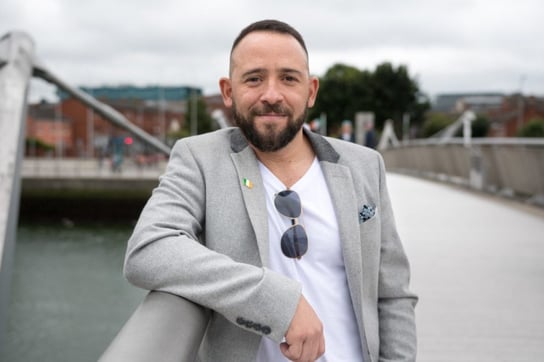 “I’m from a very religious family who lives in a conservative country. I could never be myself back home. Where I am from, if you are homosexual, people don’t treat you the same way. If you want to function in society you have to wear a mask. I always wanted to get out of there. I dreamt of going to the USA but when I was about to get my visa, 9/11 happened. A few weeks later I got the opportunity to move to Ireland. All I knew was that Westlife and U2 were from there, and I had 24 hours to decide if I wanted to take the flight. Taking that plane was the best decision of my life! I’m living in Ireland for over a decade now. I am an Irish Citizen. If you ask me where I am from I say; ‘I’m from Tallagh’. I was born in Brazil but I have an Irish Heart. Ireland gave me the freedom to be who I am without any acting. I’m still, to this day, fighting my inner demons because the religious country where I always felt broken still has its roots deep in my soul. But here nobody treats me any differently… I can’t really explain the feeling… It’s so liberating, that to this day, I get butterflies in my stomach just thinking about it.” 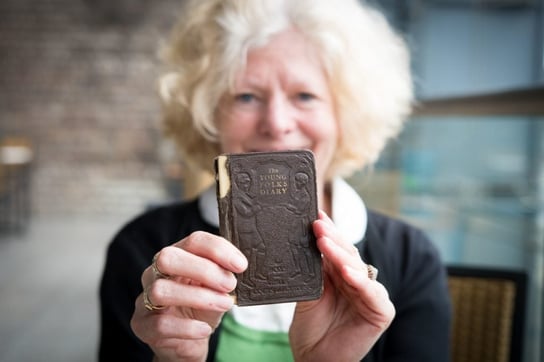 “This is my mother’s diary of her first kisses from the summer of 1951 when she was 14-years-old. She grew up in England but she used to come back every summer to visit her relatives in Roscommon and Leitrim. She loved coming back and she always talked about how much she wanted to move back… One day, I was sent to Dublin to do some research for the University of Hertfordshire and I spent a good few weeks here. I had so much fun, I made so many new friends and I loved and laughed…. suddenly I understood what she was talking about… In London, I was just after a breakup and I was miserable and lonely. So, I thought maybe I could actually do what my mother had only dreamed of. I moved back to Ireland 23 years ago… I wonder what she would say if she knew what impact her summer of ’51 left on her daughter…”

"My father was a great man, he sacrificed his life for his family" 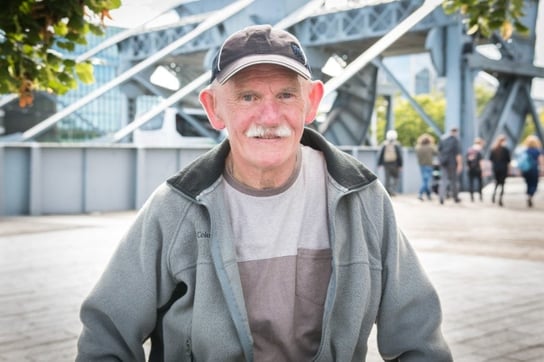 “My father was a great man, he sacrificed his life for his family. There wasn’t any work here so he had to go to the UK and work very hard to keep us alive back in Ireland. I was his only son and he had three more daughters. He could only come home twice a year, but whenever he was at home he would take me to the All Ireland and to big GAA matches… Only me and him! Without my sisters, I remember feeling so proud walking beside him. He wanted me to become a GAA player and I’ll never forget, one day he sent me a pair of football boots. One of the old-fashioned ones with an ankle protector on the side. I felt ten feet tall in them. It was a big deal! Back then nobody on my team had proper shoes not to mention real football boots… Every time he came home he would see the difference in us and he was heartbroken, he knew he was missing out on our childhood. At the time there was an anti-Irish feeling in the UK, it was when there were ‘NO Blacks, NO Dogs, NO Irish’ signs everywhere and the IRA started bombing cars. Every time he had to leave his family, he had to go back to work in this very hostile environment; but he never said a word, never complained, he just gave us a big hug and said ‘see you soon! My father was a wonderful man…”

"I’m a teacher and she is an Archaeologist, we both had busy schedules and well-rooted habits…" 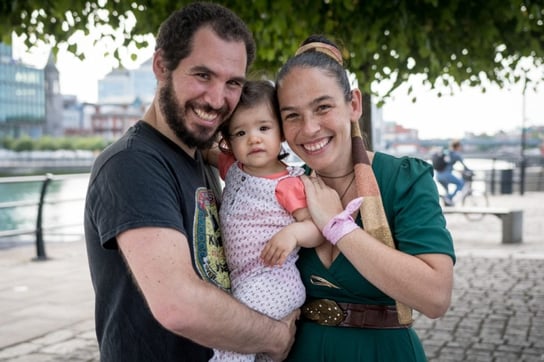 “We fell in love back home in Italy; but soon after we started to date I got offered a job in the US, so we basically started out as a long distance relationship. When she moved over, months later, it was the first time we actually lived together and shared a room with someone. For her, it was also the first time living in a different country so it was really intense for about six months. I’m a teacher and she is an Archaeologist, we both had busy schedules and well-rooted habits… We had a lot of fights in the beginning and we almost gave up, but we didn’t have the option to just run home. So we had to figure it out. Only when we started to cook together we discovered a place, a common ground in a foreign country where we really understood each other. We would spend hours in the kitchen and would invite whoever we met that week for dinner to create new friendships. Just when we were finally starting to feel at home, I got a job offer here in Ireland that I couldn’t say no to. We had to start over again. We knew it wouldn’t be easy, but this time we had our special toolbox, our common ground where we felt at home. Looking back, we’re glad that we didn’t give up, otherwise, we wouldn’t have our beautiful daughter and so many friends around…”

Thanks to Humans of Dublin for capturing these amazing stories. EPIC and Europeana will be running our next Story Collecting Weekend on 24-25 November, from 10:00am - 5:00pm. The event is free to attend and open to anyone that has a story of migration that they wish to share. Your story and objects will be documented and photographed, and stored in Europeana's digital archive that aims to chart the social history of migration.