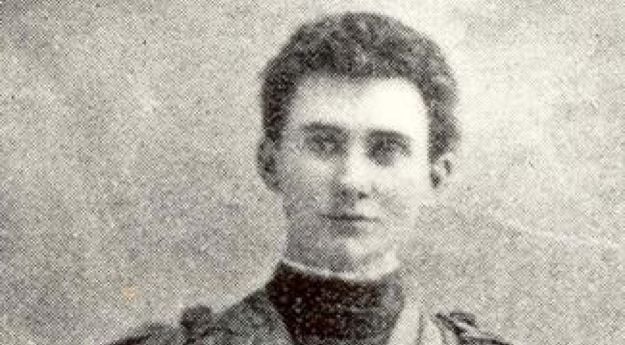 Mabel was twelfth of the thirteen children of landowner and barrister Michael Cahill of Ballyconra House, Ballyragget and his wife, Margaret Mangan. Margaret died in c.1875, and Michael married Elizabeth Netterville a year later. According to Michael’s will, Elizabeth had ‘shamefully deserted’ him by 1877. When Mabel and her siblings were orphaned, she and at least two others were attending Roscrea School; three older brothers had previously emigrated to California.

By 1886, Mabel had moved to Dublin and was actively involved in the genteel sport of lawn tennis.

Twenty-six-year-old Mabel arrived in New York City in October 1889. Shortly afterwards, she joined the city tennis club, and quickly gained notice. The Brooklyn Daily Eagle wrote, ‘the severity of her play is the terror of opponents of her own sex.’

In 1891, she entered the US Open tennis championship, but lost the final to the defending champion, Ellen Roosevelt. She was vindicated in the following year, when she became the first non-American – and the only Irish person ever – to win a US Open title. She also became the first player ever to win the singles, doubles and mixed doubles titles in the same year, and was described as ‘the foremost racquet wielder in America.’

Tennis fans may have been disappointed that she did not defend her titles in the 1893 US Open and that, by 1896, she had ‘dropped tennis entirely for equestrianism’.

It is not clear how Cahill supported herself financially. While she may have had a stipend from her father’s estate, this cannot have been substantial due to the size of the family. Her writing may, therefore, have been a response to financial need. In 1891, she published a romantic novel, Her Playthings, Men, followed a year later by the shorter works Carved in Marble (1892) and Purple Sparkling (1892). Playthings was light and insubstantial, and its commercial failure may have disappointed her. She had little more success as a journalist, publishing articles on ‘The Art of Playing Good Tennis’ and ‘Arranging a Tennis Tournament’ in the Ladies’ Home Journal in 1893.

In 1896, she took a lawsuit against a New York police officer who refused to take seriously her complaints about repeated harassment and physical assaults by gangs of small boys. In evidence, the defendant said that ‘the boys called her a new woman […] and that she wore a striking costume.’

Whether due to poverty or illness, Mabel spent the final years of her life in a manner very different to her genteel upbringing. A woman of the same name and similar age is recorded in various English workhouses in 1897, 1900, and 1905. Attempting to support herself, she continued to publish occasionally in magazines, and acted on the London stage, taking a case against a theatre manager over earnings.

A woman of her name, age, and occupation (journalist) died in the workhouse at Ormskirk, Lancashire, of phthisis laryngeal (tuberculosis of the larynx), on 2 February 1905. When, in 1936, the Irish Lawn Tennis Association placed an advertisement in the national press requesting that she, or a representative, claim a gold medallion struck in her honour, it took three months for a family member to come forward. The medal was never struck.

She was inducted into the International Tennis Hall of Fame in 1976. Despite her standard-setting record, her life story was, until recently, shrouded in mystery.

Blazing a Trail exhibition at EPIC is in collaboration with Herstory and the Department of Foreign Affairs and Trade. The exhibition, launched in November 2018, runs again at EPIC at various dates from January - March as part of a series of special events at EPIC as part of the Herstory 20/20 project focusing on Ireland's epic women. Click here to find out more about our events as part of Herstory.