How Moneygall gave birth to the President of the United States 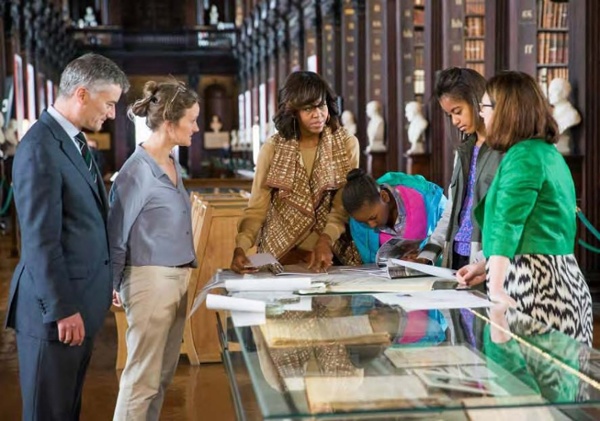 The American President Barack Obama’s great-great-great grandfather was Falmouth Kearney. The name is an unusual one in Ireland, and it represents intermarriage of families from two different European traditions: the Falmouth (originally Walmouth) family, religious refugees from the continent that settled in Ireland; and the Irish Kearney family. The interwoven history of these families shines a light on the cultural diversity present in 18th- and 19th-century Ireland.

By 1710 the Walmouth and Behn merchant families settled in Limerick. They may have chosen that city because it was one of Ireland’s main deepwater ports with strong trade connections to the West Indies and the American colonies.

By 1750 the next generation ‘anglicised’ their name to Benn and one branch of the family settled on a farm outside Roscrea, in Tipperary. Farmer Dick Benn, one of former President Obama’s closest Irish cousins, continues to farm there to the present day.

The Kearney family’s earliest traceable roots are to the village of Shinrone, in present day Co Offaly. In 1718, Michael Kearney joined a Dublin Guild, established a business as a ‘peruke’ or wig-maker and set up shop on Castle Street, beside the seat of government. Marsh’s Library preserves a map showing Kearney’s house.

Wigs for men, and hairpieces for women, were essential for formal dress occasions — the 18th-century equivalent of a business suit. The business was hugely successful, and in 1726 Michael Kearney was elected as Master of his Guild. Trinity College archives preserves a pamphlet — by a political opponent — concerning that election.

Thinking of researching your own family tree? Click here to find out how you can discover your Irish roots!

In 1763 Michael Kearney died in Dublin, and the wig-business in Offaly passed to his nephews, Thomas and Joseph Kearney of Shinrone. Kearney’s own sons were educated into the professions, and one of them, John Kearney, was elected Provost of Trinity College (1799-1806).

By 1800 fashions changed again, and the business folded. The Kearneys became shoe-makers, and settled in Moneygall, Co Offaly. In 1848 the Kearneys in Moneygall received news of an inheritance in Ohio, in the United States. Between 1849 and 1852 the extended Kearney family, including Falmouth Kearney, left Ireland for America.

Considering this family’s most famous descendent — former President Obama — it’s curious to see that diversity and politics figured early in the family history.

Twenty-two of the 45 US presidents have Irish ancestry. You can discover more about Barack Obama and the Irish-American presidents in the Leading Change gallery at EPIC The Irish Emigration Museum.