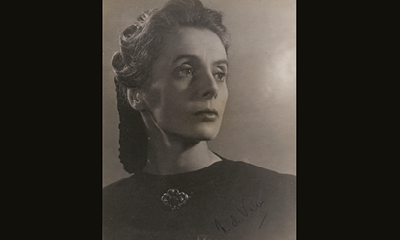 The founder of the Royal Ballet who was always "of Ireland"

To this day, the Irish born dancer, Dame Ninette de Valois is still described as the doyenne of the dance, the grand dame of English ballet and the architect of Irish ballet. In a career as dancer, teacher and choreographer that spanned almost four decades Ninette was celebrated as a dominant figure in English and Irish ballet.

Born Edris Stannus in Blessington, County Wicklow in 1898, her family moved to Walmer, Kent when Edris was seven years old. Her interest in dance developed from an early age and she trained at the Lila Field Academy for Children with which she went on her first tour in 1913. By then Stannus had changed her name to Ninette de Valois, possibly with the hope to connect her with the longstanding tradition of French ballet.

Valois joined the famous Ballets Russes by Sergei Diaghilev in September 1923 and toured with the company for three years. During her time with the company, as her skills improved, she began to form her own ideas about establishing a British ballet company.

In 1926 she opened the Academy of Choreographic Art and later the same year she became the resident choreographer at the Festival Theatre in Cambridge where she met W.B. Yeats in 1927. On Yeats’ request Valois came to Dublin and established the Abbey Theatre School of Ballet. In addition to that, she collaborated with Yeats on the staging and choreography of four of his plays between 1929 and 1934.

In 1935 she married the London-based general practicioner, Dr Arthur Blackall Connell. Despite the constraints experienced during the Second World War, under Valois’ direction the Sadler’s Wells Ballet and its ballet school grew in reputation thanks to extensive touring. In 1946 the ballet became the resident company at the reopened Royal Opera House in Covent Garden.

In 1951 Valois was made a Dame and in 1956 her company and school received a royal charter from Queen Elizabeth II, becoming the Royal Ballet and the Royal Ballet School. After serving as director of the company and school for 32 years, Dame Ninette retired in 1963. She remained actively involved in the world of dance well into advanced age, regularly attending ballet performances. Despite having
spent most of her life and professional career in England, she always insisted ‘I am of Ireland.’