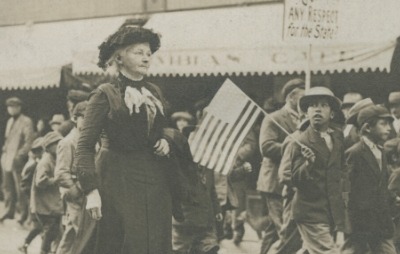 Mary Harris Jones (aka "Mother Jones") was a union activist. She founded the Social Democratic Party, and helped establish the Industrial Workers of the World.

Mary Harris Jones was born in 1830 in County Cork, Ireland. Her family left the devastation brought by the Irish Potato Famine and emigrated westward, first to Canada and then to American. Tragedy befell Jones when she lost her family to a yellow fever outbreak and then her home in the great Chicago fire. She went on to become a labor activist and was given the nickname “Mother Jones.” A champion of the working class, Jones was a campaigner for the United Mine Workers Union, founded the Social Democratic Party and helped establish the Industrial Workers of the World. Jones died in 1930.

Labor activist Mother Jones was born Mary Harris in 1830 in County Cork, Ireland. During her early years, she and her family fled the ravages of the Irish Potato Famine and moved to Toronto, Canada, Michigan and Chicago, Illinois. She attended school in Toronto and began her career as a teacher and dressmaker to become a tireless fighter for the working class.

Mother Jones experienced many great personal tragedies during the first part of her life. She lived in Memphis for a time, marrying George Jones, an iron worker and strong union supporter, in 1861. They had several children together, but an outbreak of yellow fever killed her husband and children in 1867. She returned to Chicago and found work as a dressmaker. But then she lost her home in the great Chicago fire of 1871.

After this latest loss, Mother Jones began her work as a labor activist. She worked with the Knights of Labor, often giving speeches to inspire the workers during strikes. Around this time, she traveled to numerous strike sites, helping coal miners in Pennsylvania in 1873 and railroad workers in 1877. The way she cared for the workers inspired them to nickname her "Mother."

Known as the miner's angel, Mother Jones became an active campaigner for the United Mine Workers Union. A political progressive, she was a founder of the Social Democratic Party in 1898. Jones also helped establish the Industrial Workers of the World in 1905. For all of her social reform and labor activities, she was considered by the authorities to be one of the most dangerous women in America.

Nothing could dissuade Mother Jones from her work. At the age of 82, she was arrested for her part in a West Virginia strike that turned violent and was sentenced to 20 years. But her supporters rallied and convinced the governor to grant her a pardon. Jones, undeterred, returned to organizing workers.

In honor of her allegedly 100th birthday (there is some speculation as to her actual birth date), Mother Jones was celebrated across the country with special labor events in 1930. She died on November 30 of that year. With the workers to the end, she asked to be buried in the Miners Cemetery in Mt. Olive, Illinois.